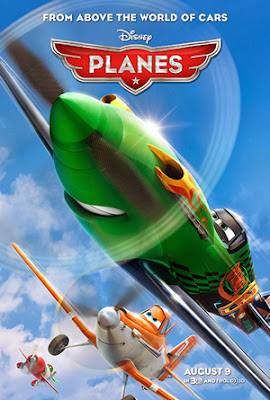 Planes ~ I was hesitant to jump back into the 'World of Cars,' because of the revelation I made while watching Cars 2, you know, that the 'World of Cars' is actually occurring in the aftermath of Stephen King's short story "Trucks." I know, scared the crap outta me too. But The Bride wanted to see it, so I went along.

This one is similar to Cars 2, in that it's about racing, and in this case, planes. Dusty Clodhopper - voiced by Dane Cook, who is much less annoying when all you hear is scripted and you don't have to see him - is a small town cropduster who wants to be a racing plane in the big leagues and enters a race around the world. Underdog makes good, that kind of thing.

We have seen this before. Good voice cast, lots of clichés with fresh takes, and jokes for the kids and the adults, Planes is a good hour and a half of harmless entertainment. There's nothing really new, nothing to make us go wow, or how did they do that? A good Pixar flick, originally made for direct-to-DVD, so to do so well in theaters, it must have something. Enjoyable.