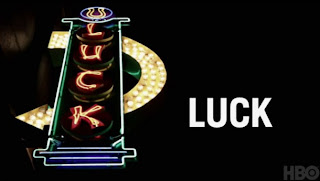 I'll watch any drama on HBO. There is simply a level of quality that is always present. And it doesn't matter what a given television series is about, there is always amazing writing, direction, and performance, always.

My mother-in-law notoriously dislikes science fiction, fantasy, and horror. That genre stuff just turns her off. It's too 'creepy' to use her word. Yet last summer she was sucked into the fantasy world of George R.R. Martin's "A Game of Thrones." She even watched several episodes one right after the other to catch up. That is the magic of HBO drama. It doesn't matter what it's about, it matters how it's done, and the quality and care with which it is done. 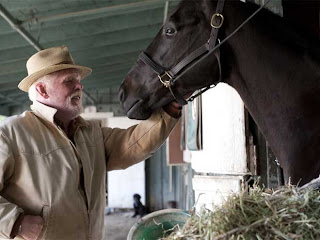 That brings us to "Luck." I really couldn't care less about horse racing. It does less for me than genre television does for the mom-in-law, but the HBO drama rule pulled me in. The sneak peek of the pilot back in December hooked me and made me wait with baited breath for the series debut a few weeks back. This show is fabulous.

The HBO drama rule is not all it has going for it though. Oh there is a slight "Sopranos" vibe going on, but that's not the kicker. What drives this show is the acting. You've got some heavy hitters here with Dustin Hoffman, Nick Nolte, and Dennis Farina, as well as an ensemble of some of the best character actors around. Most notable are Kevin Dunn, Richard Kind, and one of my faves, from the much missed "Dirt," Ian Hart. 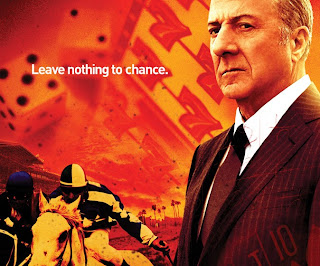 The series, created by writer David Milch who also worked on the network's terrific and also missed "Deadwood," follows the events and characters tied to a particular race track, and it's all done with class and in the slick style of executive producer Michael Mann. These two allow the big three actors to be as big as they want on the small screen and it's a good thing - all are at their best here.

There are only nine episodes in this first season, and with the fourth coming this Sunday, there's plenty of time to catch up. This is yet another HBO show you should not miss.

Just a reminder, The Virtual Book Tour for THE HUNGRY HEART STORIES is featured today at Shelley Szajner's blog with an interview with the author Fran Metzman, and continues tomorrow on Becca Butcher's blog. Don't miss it!