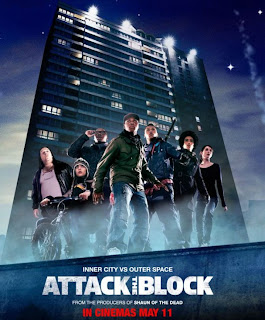 Attack the Block ~ Every once in a while a movie comes in under the radar and by pure word of mouth everyone is like, "You have to see this." Attack the Block is one of those films. Not in theaters, couldn't find it bootleg, and it took forever to get through Netflix, but I finally got a chance to see it.

Attack the Block has been billed as an alien invasion movie in the style of Shaun of the Dead, and it does in fact have Nick Frost in it and was written and directed by Frost/Simon Peggy/Edgar Wright collaborator Joe Cornish. The premise has aliens attacking South London and a teenage street gang defending their turf. In reality, it's a theme that dates back to the American 1950s, but Cornish delivers it with flava. The flick begins when the boys kill an alien and descend into the teenage underworld looking for bragging rights and cash. 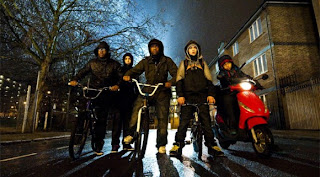 Once I got my head back in "Eastenders" mode (I'm out of practice, PBS stopped showing it in this area several years ago, and I'm never going to forgive you, channel 12) and was able to understand the thick accents that pass for English, I was all good with these kids, but it did take a while, some concentration, and subtitles. When it turns out it ain't just one alien out there, the real fun begins. It's really Shaun of the Dead meets The Warriors meets Red Dawn set in Walford Square under alien siege. Yeah, it's that much fun.

I really kinda dug the almost Akira-like moped chases, and the aliens are truly frightening - big black furry masses with neon blue jaws of teeth. The colors of this flick are amazing. Intense, scary, brutal, and visually stunning, Attack the Block lives up to the hype, and is a must-see.