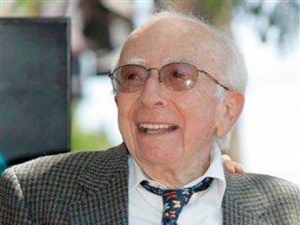 Writer/producer Sherwood Schwartz passed away in Los Angeles this morning after several surgeries. He was 94. Schwartz was best known for being the creator of two of the most memorable television series of the 1960s and 1970s - "The Brady Bunch" and "Gilligan's Island."

Both shows had a huge influence on the childhoods of of several generations, and could be said to have even formed what many people considered sitcom humor. As a child myself, I don't remember a time when these two programs were not on the air in syndication, and also that they had both appeared on every UHF station in the Philadelphia area. I also remember vividly having to be home on Friday nights to see new episodes of "Brady Bunch" and coming home for lunch to see reruns as well.

Both series lived on for decades in syndication and in animation and reunions, and for the Bradys, in film as well - such is the legacy of Sherwood Schwartz.