I Watched the Watchmen 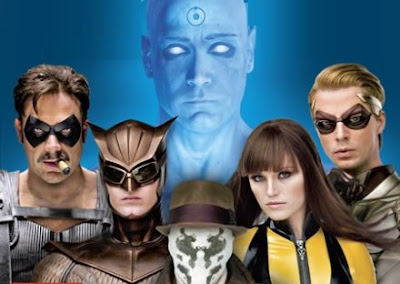 In most genre circles, Watchmen's reputation precedes it. Watchmen is the comic book that changed everything back in 1986. This 'graphic novel' (we'll get to that in a moment), originally comprised of twelve monthly issues by writer Alan Moore and artist Dave Gibbons, along with Frank Miller's The Dark Knight Returns and Neil Gaiman's Sandman, is a watermark for comic books - it's the point where comics grew up. It's where they became mainstream. The above-mentioned books are what officially put comics in bookstores and libraries, it's what made comics cool for adults, and most importantly - possibly Hollywood. 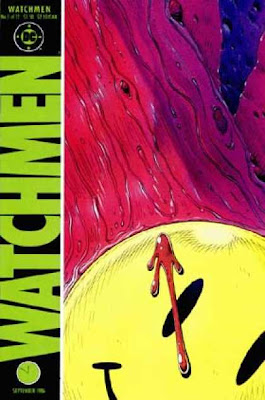 My problem with the term 'graphic novel' is that it seems to be shorthand for Hollywood to fool those out-of-the-know who might not see a movie based on a comic book. Apparently 'graphic novel' is more palatable for intellectuals than just a 'funny book.'

So let's get this straight right now, and pay attention all you idiots on Wikipedia and in the marketing departments of DC and Marvel, Watchmen is a comic book series that was later reprinted in a trade paperback format. A graphic novel is a comic that was originally created specifically for the trade paperback format. Got it? Art Spiegelman's Pulitzer Prize winning Maus is a graphic novel. The latest collection of Secret Invasion, as well as Watchmen, is just a comic book in a slick reprint format. 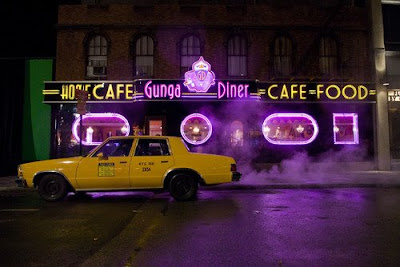 Back on point, it's taken twenty-three years, and several directors who all claimed it was 'unfilmable,' Watchmen has finally made it to theatres. The first photos that drifted onto the internet showed only sets, but sets that were vitally important to the story and virtually identical to the comic. As more images surfaced it was apparent that director Zack Snyder had not only found a way to film the comics, but to do it serious justice. The industry was suitably pleased and fired up. 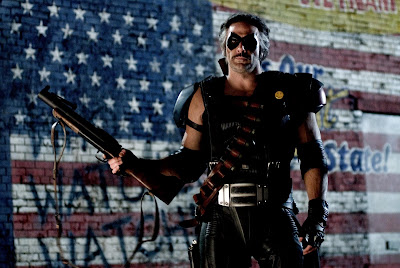 What is it all about? Watchmen, as much as it seems like a superhero movie, is really a political thriller, and a murder mystery, but really at its core, it is the deconstruction of the superhero concept. What if there were superheroes? How would it affect society, culture, and history? This is it.

In a 1985 world on the brink of nuclear destruction, superheroes have been outlawed and someone is now killing them. This multi-generational story spans over four decades and reveals the conspiracy piece by piece as the creepy vigilante Rorshach tries to find the murderer. It is a dizzyingly complex story, that in the comics introduced parallel and multiple storytelling devices to the genre, may even be too hard for most brain dead movie audiences to understand. Which is a damn shame, because Watchmen, even in its abbreviated film form, is brilliant - but hopefully there are enough explosions to keep even the intellectually impaired interested.

The film deviates from the comic once or twice, adding details and dialogue, and of course we have a different (not new, but different, same effect so it does not affect the story) ending - but for the most part, it is the comic. Scenes and shots are as if realized directly from the pages. And a weird phenomenon occurs for folks who have read the comics, like a movie seen multiple times, the first screening audience I saw this with was saying the lines with the characters. Yeah, it's that damn close, and it's terrific. Brilliant score by Tyler Bates, among others. And the cinematography is amazing as many of the covers of the comics are brought to vivid life as well. 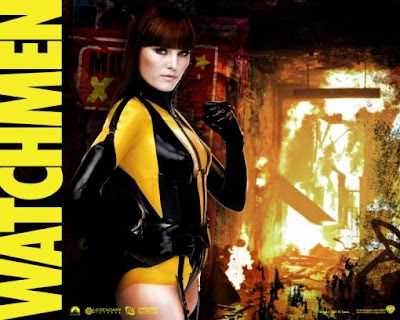 The cast is equally phenomenal. I really don't know if it's possible to have found a more perfect Rorshach than Jackie Earle Haley. He looks like him, talks like him and is even the right height - something the folks doing the X-Men flicks never gave a second thought to when casting Hugh Jackman as Wolverine. Unlike many critics I had no problem with Billy Crudup's voice (or performance) as Doctor Manhattan, and I promise not to make any blue weiner jokes, we are after all, all adults here. Jeffrey Dean Morgan and Patrick Wilson are excellent as the Comedian and the second Nite Owl (spelled correctly, another note for those who refuse to research).

The real breakout star of Watchmen is Malin Ackerman who plays the second Silk Spectre. She is the star here, both in performance and beauty, and is definitely -pun unintended- someone to watch. Matt Frewer was a problem for me as being recognizable. I saw him and said, "Hey, there's Matt Frewer," and it took me out of the movie. Also another small nit was the unidentifiable accent of Matthew Goode as Adrian Veidt. Is it British? Is it German? Does even he know? I must say however, Goode is more convincing on the screen than he is in any of the pre-release images. He is Ozymandias. 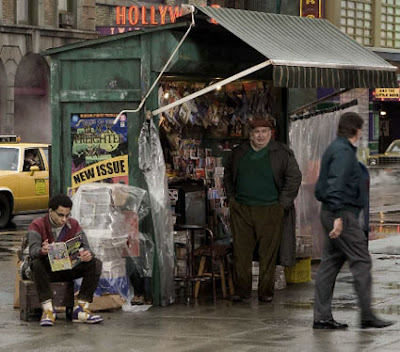 My only real problem with the film is not anything wrong with it, per say, but wrong with the jump from comics to film. The best part of the comics for me were the supporting cast on the street, in front of the Gunga Diner. The newsdealer, the lady cab driver, the kid reading the Tales of the Black Freighter comic book. They appear on screen briefly, but it's just not enough for me. In the comics they were the characters I grew to care about, not the superheroes. The loss is one for the readers, not the viewers, and it doesn't make the film any less great, but it is a major lost opportunity.

All in all, it is an amazing film and a phenomenal film experience. Be warned though, this may be a superhero flick, but it's not for the kids. Violence, sex, language, mature themes and all that stuff. It's also no Iron Man, this film, nor the comic it is based on, is a gateway drug to comics. This isn't going to recruit anyone, but hopefully it will garner respect for the genre, and make some people think. Now, let's get some Sandman or Starman comics into Zack Snyder's hands and have some real fun...
Posted by Unknown at Friday, March 06, 2009