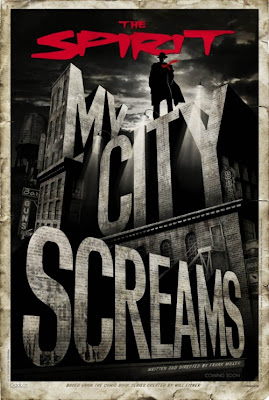 That’s right, this is Frank Miller’s The Spirit, not Will Eisner’s, that’s for damn sure. Frank Miller hates superheroes. I’ve said it before, and I’m pretty sure I’ll say it again. Frank Miller hates superheroes. If The Dark Knight Strikes Back is Exhibit A, then surely this film, 2008’s The Spirit is Exhibit B. I have read and heard that Eisner and Miller were great friends. I can only suppose that they fought before the former’s death because I think this interpretation of his hallmark character may well have him spinning in his grave. Frank Miller’s The Spirit is a hate mail for not just comic book fans but movie goers as well.

Was the Sin City sequel not ready for a Christmas release so the studio grabbed Frank Miller and forced him to rush this piece of crap into theatres? That’s my only guess, because it certainly looks more like Sin City than any possible version of the Spirit. Again I am pulled back to the Miller/Eisner friendship. What did they talk about? Surely not the Spirit because obviously Miller doesn’t have a clue what that’s about. 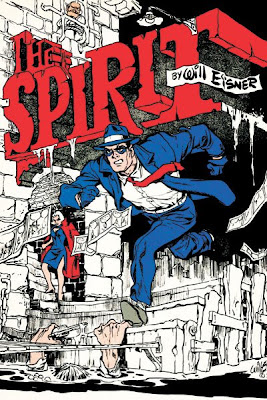 For those not in the know. The Spirit is an amazing comics character created by Will Eisner specifically for the newspapers, a stroke of brilliance at the time as it wasn’t a newspaper comic strip, but a weekly comic book insert that came in the Sunday paper. The Spirit stories were known for their imaginative and innovative graphic design and storytelling structure – decades ahead of anything that was going on in ‘real’ comic books of the time. Eisner was truly a genius ahead of his time, and one of the masters of the artform.

The character of the Spirit himself was ex-cop Denny Colt. Exposed to a weird chemical he appeared to be dead but was really in suspended animation when buried and written off as dead. Crawling out of the grave, donning a mask and using his now officially dead status as a cover, he became the Spirit and defended the people of Central City from all manner of villain, many of them female, and frequently rivaling the rogues galleries of Batman and Dick Tracy in their strangeness.

How Frank Miller took that and got this movie is something I will never understand. It reminds of “Smallville” in one way – some of the names are familiar but nothing else is. Frank Miller’s Spirit is super-powered where the original never was. He shares an origin with archenemy the Octopus in that a chemical exposure left them both with ridiculous Wolverine-like regenerative powers. They can’t die, and so engage in cartoon-like combat with anvils and infinite bullet holes. I think even Tex Avery would think these scenes overindulgent. 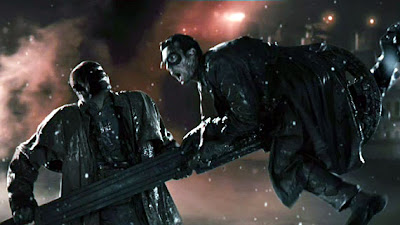 These aren’t the only differences. Most annoying that Miller’s Spirit is all in black, except for the red tie. The Spirit really doesn’t have a costume for heaven sakes, so why is it so hard to get it right? In the comics, simplicity itself, blue business suit, blue hat, blue gloves, blue mask, and red tie. Well, at least he got the tie right. This is a CGI motion capture film, you can’t tell me that blue wouldn’t work, or for that matter, look terrific. Is it really that hard? Comic book superheroes come in colors, for some reason Hollywood mutants forget that. Miller, having worked in the industry, should know better. But then again, it’s probably on purpose, he does hate superheroes, remember?

The casting is interesting. I liked Gabriel Macht in the title role, a lot. It’s a shame he couldn’t be the real Spirit because he would be terrific. Too bad Frank Miller has made it so no one will ever want to make another Spirit movie ever again, so bad the stigma will be from this. Dolan is miscast, and the women are all breathtakingly beautiful, if only on hand most of the time as sex objects. This is Frank Miller after all. Are we sure this isn’t the Sin City sequel? I know he hates superheroes, but I wonder what his problem with women is as well. Maybe he hates everything as everything gets the short end of the stick in this flick. Including Miller’s own cameo –P.U.

Louis Lombardi provides a bit of odd comic relief. Funny only if you are into S&M or the Three Stooges I suppose. He plays multiple clones who are henchmen to the Octopus, killed and mistreated left and right, and assures that Lombardi will never get a serious role again, much less any part of any “Sopranos” or “24” reunions. The clone names, printed on the fronts of their shirts, provide a bit of an inappropriate injoke that can distract from how bad this flick is. 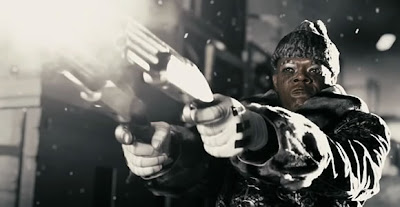 Samuel L. Jackson as the Octopus is a curiosity when you consider, that in the comic book version, you never see the Octopus, never. It’s the trademark of the character. The question is not why was this done, but - can Samuel L. survive this? Can his career recover from this offensive cartoon of a movie? Over the top doesn’t cover the madness of his performance. I’m sure many directors will unfortunately think of his role as the Octopus when considering him for work and just take a pass. I love Sam, but he stepped in it this time.

Frank Miller hates superheroes, and he must really really hate the Spirit. Maybe he saw what a success The Dark Knight was and decided he had to kill this beast before it got too big, too popular. He had to drag comics back into the literary gutter where he thinks they belong. Well, Frank, after seeing your interpretation of the Spirit, all I can say, is “Good job.”
Posted by Unknown at Friday, February 20, 2009