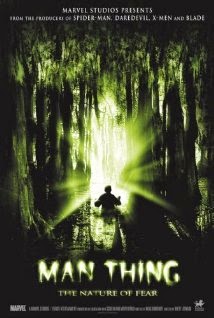 A Television Review of the film "Man-Thing" broadcast on the SciFi Channel.

The film version of Man-Thing supposedly was made and meant for theatrical release, as I've just viewed it on the SciFi Channel, I would guess those plans fell through. Granted, the Man-Thing is no Spider-Man, Hulk or X-Men, but that doesn't meant the concept couldn't hold its own on the big screen, or does it?

My sister, a big SciFi Channel fan, and I have discussed the schedule for that network on weekends quite a bit. Weekends seem to be a dumping ground for the absolute worst Z-grade scifi and horror films currently being made. Most notorious for flicks about giant snakes, alien abductions and guest starring Kari Wuhrer and Billy Baldwin, this death slot of bad television is where they aired Man-Thing - Saturday night at nine PM, prime time.

In the comics, Man-Thing is something of a footnote for various reasons. The concept is one of the true coincidences in the comics world, where two major publishers have had roughly the same idea at the exact same time. There was the Vision and the Red Tornado, Crisis on Infinite Earths and Secret Wars, and Man-Thing and Swamp Thing.
Both Man-Thing and Swamp Thing were men that were by horrible consequences transformed into bog creatures, and they both debuted on the stands simultaneously. Marvel's Man-Thing, created by Steve Gerber (also of Howard the Duck, another fantastic character crucified and disemboweled by Hollywood), had decidedly less success than DC's Swamp Thing however.

Man-Thing also had a great tagline - "Whatever knows fear burns at the touch of the Man-Thing!" If only the stories and the characters matched that line or even halfway lived up to the hype. While Man-Thing lasted, riding the wave of early 1970s Marvel horror, it did make a mark and remains a fixture and fan favorite in today's comics. Appearances with such other obtuse characters like the Hulk, Howard the Duck and the Micronauts were memorable. 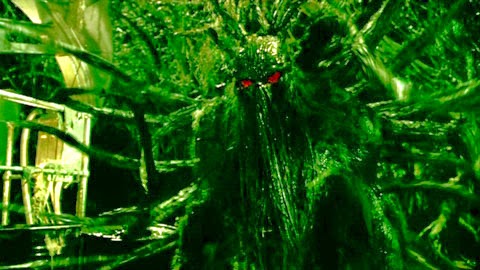 The Man-Thing's most notorious claim to fame however might be the dangerous double entendre it gained in the mid-1970s with a companion title. At the time, Marvel was publishing larger books with bigger stories and added reprints of most of its books, called Giant-Sized books. You guessed it, thus was born Giant-Size Man-Thing, still legendary to this day. Despite what some folks may think, the book was still about a swamp creature and had nothing to do with what you're thinking. Shame on you!

From Lions Gate and Marvel Productions, we now have the movie. Despite being made for theatrical release and having a slamming soundtrack, the film does have the stink of a Saturday night SciFi Channel offering. Badly written, no name actors and a sad, pitiful premise where a reasonable, simpler one would have worked better.
The cinematic Man-Thing is an eco-champion, preying on evil industrialists who pollute and corrupt nature. He's (it's?) also a monster in the most fundamental manner. Shambling about, growling and staying in the dark for most of the time to hide any shabby special effects, he takes out The Man and helps out the bayou natives and Earth-friendly folk. Here Man-Thing is definitely more Bigfoot than Swamp Thing when you come right down to it.

When we do actually do see Man-Thing, the face is pretty close to the comics with the three roots hanging down and the piercing red eyes. However, the rest of the body is a whole other thing, or, pun intended, Man-Thing. Too skinny and too many wild, apparently sentient, and very Dr. Octopus-like roots to do its bidding are the highlights of this Man-Thing.

The story was slow and contrived, and especially cliched. Prophecy from 1979 did it much better. Nice touch though having a character named Ploog, named after artist Mike Ploog who depicted the swamp creature back in the 1970s, it proves the folks in charge at least had clue about the source material.

This could have been good. Director Brett Leonard has had quite a few misses, but when he hits (the highly underrated cyberpunk thriller Virtuosity and the absolutely brilliant Shock to the System) he hits hard. Shame he didn't put that kind of effort into Man-Thing. In related comics news however, the writer of this one, Hans Rodionoff is also rumored to be working on a script for another 1970s Marvel horror, Werewolf by Night.

An R-rated version of Man-Thing debuts in DVD on June 14th. Now maybe if they make a sequel, and Sci-Fi is notorious for making sequels to movies that by every right under the sun shouldn't be made, maybe they'll call it Giant-Size Man-Thing.