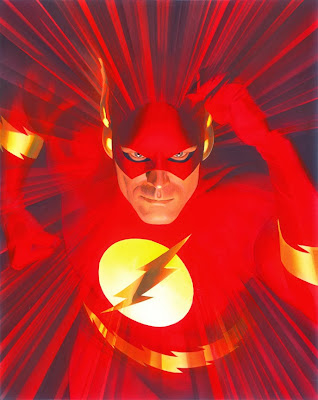 This is it, the episode, no, make that the two-part mid-season finale episode, we have all been waiting for. "Arrow" has been teasing us with comic book Easter eggs throughout the first season, and it has taken on a manic pace in the second - now we will see the debut of Barry Allen, destined to soon become, in a CW pilot, the Flash.

Now this isn't Barry Allen's first merry-go-round on television. He was animated by Filmation in the 1960s, and Hanna-Barbera in the 1970s. He made his first live-action appearance in the much-maligned "Legends of the Super-Heroes," and over a decade later starred in his own short-lived and low-rated TV series on CBS in the early 1990s. It was an expensive show, disliked by the comics community at the time, but it has aged well. Many look back on it fondly, myself included, but I liked it at the time as well. 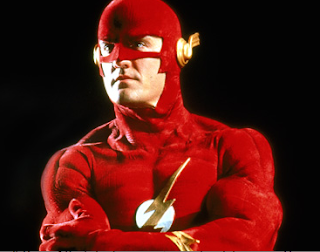 The Flash was a mainstay of the DC Comics Animated Universe as a member of the Justice League, and was even in the TV pilot that some folks hated more than "Legends." Probably the less said about that the better. The character is almost a lock for a cameo at least, if not more, in the upcoming Man of Steel sequel, Batman vs. Superman.

In the comics, the Barry Allen was the first of the Silver Age superheroes, imbued with super speed after being splashed with electrified chemicals. He was my brother's favorite, and thus became my favorite. I've been reading Flash comics for almost five decades. So yeah, I'm psyched to see Barry Allen, even pre-Flash. In "Arrow," Grant Gustin, formerly the warbling villain from "Glee," is our Barry Allen. Initially I thought he was miscast, but five minutes after he first appears I am sold. You can say he's a bit nerdy, but let's face facts, Barry Allen is a nerd, a comic book geek, and a police scientist. Gustin, except for his hair color (but then again, the 1990s version, John Wesley Shipp, also had dark hair), is perfect.

With all the myriad plots and subplots going on in this series, this episode starts with a new story. A man with super strength has stolen a centrifuge from Queen Consolidated. Similar crimes in Central City brought CSI Barry Allen to Starling City. I love that he's always late, he runs after a cab in the rain (just like in his origin story), and there seems to be foreshadowing lightning in the sky over Starling City. And he and Felicity are smitten with one another. I guess Iris West must be in another area code. 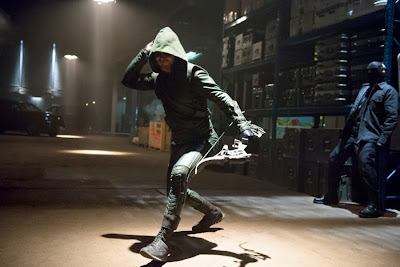 While I suspected it was one of our subplots, our perp turns out not to be Deathstroke or Solomon Grundy, but a partaker of Professor Ivo's super-serum. Oliver says Ivo is dead, as were all his subjects, but apparently someone's trying to make more. Turns out I was two-thirds right, as that someone is Brother Blood, and the guy who beat Oliver down is none other than our buddy Cyrus Gold, the as-yet-named-thusly Solomon Grundy.

Meanwhile, Barry Allen is not all he seems. He's not in Starling on assignment, but in a personal agenda. Similar to his post-Flashpoint origin, Barry's mother was murdered when he was young, by 'a man inside a tornado,' and his father went to prison for it. We know that man was Professor Zoom the Reverse-Flash. Since then Barry investigates other unexplainable cases of superhuman beings, and also idolizes folks like The Hood who could've saved his mom. Nice set-up. Outed by Oliver, he hits the road. 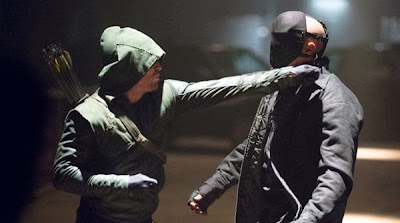 In the subplot department, Roy finds an overdose that was caused by Ivo's serum, The Hood tells him to stay out of it, and puts an arrow in his leg to make sure he does. Malcolm is still adamant that Thea is his daughter and he's going to take her away, but Moira puts the fear of the demon in him - by informing Ras Al Ghul that Merlyn is still alive. Oliver has one mean momma. She is positively icy when she tells Malcolm he should run.

After the ersatz Grundy (actor Graham Shiels growls and moans perfectly for the part) nearly beats Oliver to death, and our hero is accidentally jabbed with an unknown drug, Diggle and Felicity need help. In a scene reminiscent of a Bat Gas moment from the 1960s "Batman" TV show, they kidnap Barry. He wakes up in the 'Arrowcave,' secrets unraveling, cue credits.

There is also a nice shout out to Kord Industries, an indirect reference to the Blue Beetle, and the countdown has begun for the particle accelerator in Central City. I'm not sure if this will play out on "Arrow" or the new Flash series, but I can't wait. See you next week, same Arrow time, same Arrow channel.