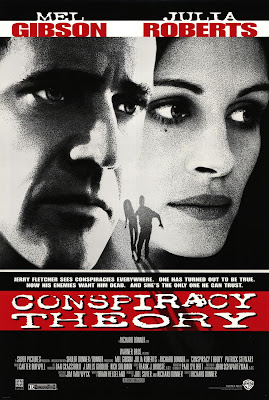 Conspiracy Theory ~ It's one thing to watch a movie you didn't really have any interest in that has been recommended by someone whose opinions you trust and respect. You may not want to see it, but usually it's an adventure, and an unexpected delight. What happens when the recommendation comes from someone whose opinions you do not trust or respect? Such is the case with Conspiracy Theory.

You might think the subject matter would be of interest to me because I'm such a Coast to Coast AM junkie, but the truth is, when they start talking conspiracies, I zone out. Give me Bigfoot and UFOs any day over that crap. Nothing against Julia Roberts, but I think she's lazy. She has two modes - Oscar nom, and give me the check. Most of the time I think it's the latter.

And then there's Mel Gibson. Mel has fallen out of favor for very solid reasons, but for me he was always on the brink of parodying himself, always a Keanu Reeves 'huh' away from ever being a good actor. And then there's all the other stuff he's done and said. I can't help seeing the Daffy Duck version of him from "South Park" now whenever I see him. 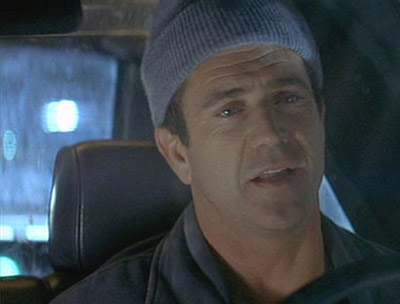 Already Conspiracy Theory has several strikes against and I'm still paused on the WB shield. Let's hope it gets better. Now I realize that Gibson is playing someone is apparently mentally unhinged, but I'm sorry the credits haven't finished running, but he is already firmly Daffy Duck-ing in my head.

Also what bugs me early on is that the conspiracies put forth are the generic Hollywood version of conspiracy theories, not real conspiracy theories. It also feels very dated, as if it was written at least a decade before its 1997 release date. The dated performances of 1980s big names Gibson and Roberts certainly don't help. 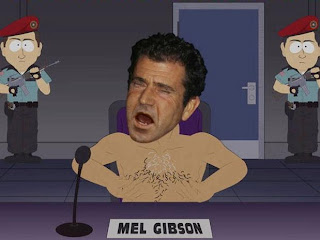 Gibson's Daffy Duck meets Curly Howard performance as a paranoid cab driver who's been brainwashed by the government makes you think you're getting a comedy and clashes horribly with the real tenor of the flick. It's a dark dark film, although you'd never know it watching Gibson cavort.

He's doing schtick, so when Patrick Stewart shows up doing his Marathon Man bad guy imitation and shoots Gibson up with LSD, you can't help but wonder what the hell you're watching. Oh, and Julia Roberts? She's about as interesting as old wallpaper in this movie. Her dye job has more charisma than her performance. This is a long movie, and it's made even longer by the overacting and under-acting of the leads, the over-explanation of the plot, the overbearing score, and the horrific and ridiculous ending. I was pretty sure I would hate this movie, and I was right.