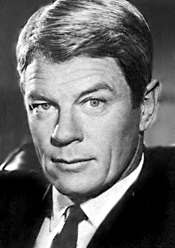 Veteran television actor Peter Graves was found dead today in his home in Los Angeles. He was 83.

Everyone's individual age and point of reference determines how one knows Peter Graves. He has worked almost non-stop for several decades, with long runs in both TV versions of "Mission: Impossible," as the narrator of "Biography," and was particularly memorable in the two Airplane! movies.

Peter Graves appeared in more than a hundred different television and film roles. We have lost a piece of TV history. He will be missed.