I went to Silver Screen Classics yesterday to catch a film that I have been told several times I need to see - Scarlet Street. Granted, I would have gotten around to getting the disc on my Netflix queue eventually, but trust me, it's always better to see anything, especially a classic film, on the big screen. For those of you not in the know, every Monday at the Showcase at the Ritz in Voorhees NJ, film historian Lou DiCrescenzo presents a classic film from years gone by along with a short subject, all on the big screen. 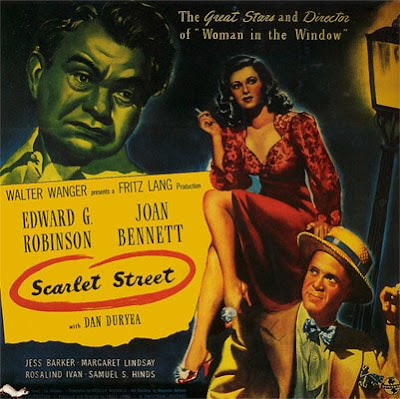 Scarlet Street is a classic film noir from master director Fritz Lang, starring tough guy Edward G. Robinson playing completely against type. He's a cashier and wannabe artist caught in a web of deceit with femme fatale Joan Bennett and her abusive con artist boyfriend Dan Duryea. Some of us might remember an older Joan Bennett as the matronly Elizabeth Stoddard on "Dark Shadows." Her role here shows she was once very hot stuff. Moody atmospheric and what every film noir should be, I really enjoyed this, and probably more than I would have had I simply seen it on a television screen.

Before the feature, Mr. DiCrescenzo presented a two-reel Mack Sennett comedy starring W.C. Fields called The Barber Shop. Great gags, and he was notably upstaged by both a kid and a dog. Terrific stuff.