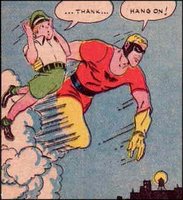 My Big Fat Independent Movie - This is a great premise with some genuine funny parts (Amelie meeting El Mariachi being my personal favorite) but like most flicks that spoof other flicks, it goes on much too long. Would've made about a dozen hilarious five-minute skits on "Saturday Night Live" or "MadTV" - unfortunately it's a eighty-minute movie. If you liked (or disliked) Swingers, Amelie, Memento, Reservoir Dogs or Pulp Fiction, you'll get more than a laugh or two out of this one.

Ringmaster - I think if we didn't have to see the bits with Jerry Springer as anything but the host of the trash talk show in question, this flick would be a lot better. The stories of the people who want to be on the show are tight and interesting, and a disturbing window into our world. See it for the freaks, not Jerry.

The Invisible Man - I recently re-watched this 1933 classic and one thing stood out for me - the violence. Anyone who is on a weekly bitch session against "24" for their depictions of torture and violence ought to cast an eye on this one. Still a classic though, any way you cut it. And Una O'Connor rocks my world.

Flight 93 - This is not only a must-see movie, it's well made, well-written and well-acted. Anyone who doesn't at least shed one tear isn't paying attention. I lost it when the operator prayed with one of the passengers, and didn't stop there.

Just Friends - This one from 2005 is another slob comedy with a heart. The guys behind the first flick on today's entry could've learned something from it. Harmless fun and romance that doesn't insult you... too much.

And anyone who gets the picture reference, go treat yourself to a cookie. ;-)
Posted by Unknown at Sunday, April 01, 2007