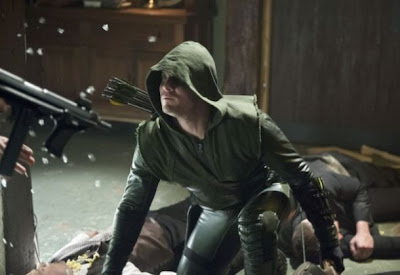 About mid-season of the "Arrow" series, the powers that be finally gave a name to the master plan that the bad guys of The List had for Starling City. They called it The Undertaking. It's never been clear what it actually was, but we know it has sinister implications for The Glades - the 'bad' section of the city, and home to Roy Harper, the Verdant nightclub, and the ersatz Arrowcave. One supposes by the title of this episode, we'll finally find out exactly what The Undertaking is. 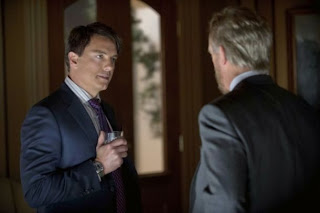 From all indications, we might just find out what happened to Walter as well. A unique flashbacknot to the island, shows us a meeting of The List several years prior. It seems their original plan was to blackmail bad people into doing good things, but John Barrowman's Merlyn suggests a new 'undertaking,' leveling The Glades and starting from scratch. No Glades, no crime. And there it is. 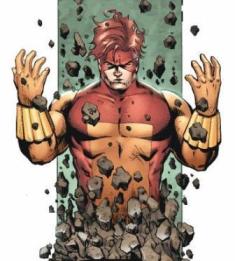 And OMG, the thing that's going to level The Glades is called the Markov device. Comics readers know that half-siblings Brion and Tara Markov are Geo-Force and Terra, metahumans with earth elemental powers. Brion was a hero who joined the Outsiders and later the Justice League. Tara was a teenage psychopath who joined the Teen Titans in order to betray them to... Deathstroke, with whom she had a very unhealthy and possibly illegal relationship. Wow. I'm guessing The Glades go in an earthquake.

In the soap opera zone, Laurel goes to Verdant to cry on Oliver's shoulder about her break-up with Tommy. Felicity's awkward walk-in may have sent odd signals to Laurel. Sigh. To quote one of my favorite "Simpsons" lines, "When are they gonna get to the fireworks factory?" In this case, fireworks factory equals superhero action. 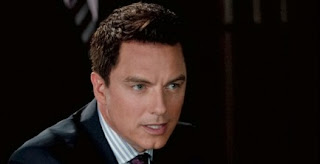 In a slightly more high quality melodrama moment we get to watch Barrowman tell of his wife's death in order to convince Oliver's father to go along with The Undertaking. It really the first time "Arrow" has given the man room to act. Finally. And we get a glimpse into the making of a villain.

In the distracting secondary plot of the episode (because on "Arrow," the overarc is always the main plot), Felicity goes undercover in a casino to find clues of Walter's whereabouts. As I've said before, Emily Bett Rickards' Felicity cleans up real nice, but then again I like her in and out of nerd. 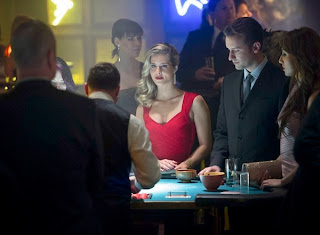 With no Diggle for back-up, The Hood has to save her, doing so like a bull in a china shop. I counted at least four arrows to the chest, one a woman, probably some of them only patrons to the casino. Once again, I find myself rooting for the police to put this murderous Bizarro version of Green Arrow away.

At first it seems that Walter was dead, and then alive. The Hood saves him, plowing through henchmen to get him, but first parachuting down onto their hideout from a plane. I couldn't get past that. Who was flying the plane? Wouldn't they know it was The Hood on board, and jumping out? Seems like a major loose end here. 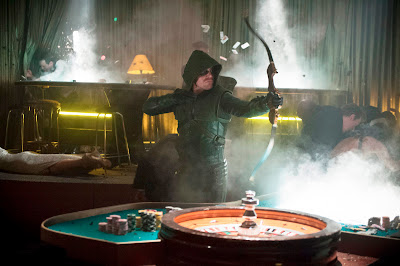 Things are heating up and finally coming together. Oliver makes up with Diggle. And he admits to Laurel he still loves her. And, most importantly, he knows that Merlyn and his mom have been lying to him, and they are behind The Undertaking. The secrets are out, time for the real game to begin.

Other shout outs to the comics in this episode include Ted Kord for whom a fundraiser was held in flashback. Ted Kord was the second Blue Beetle. And Walter was being held in Bludhaven, Dick (Nightwing) Grayson's old stomping ground.

Yes, things are finally heating up, I can't wait for the next episode. As long as they keep tying up loose ends, that is.