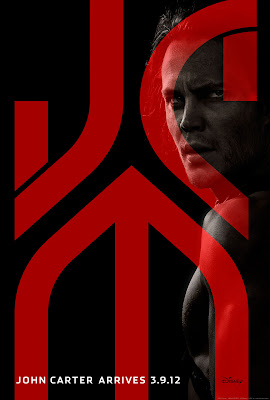 John Carter ~ In the year of The Avengers , there are only a few movies that I have been anticipating with the same tension and excitement as that of Earth's Mightiest Heroes. There is Battleship, which is more a curiosity than anything else, as in how can a flick based on a kids game have such an awesome trailer? There's also The Dark Knight Rises, which falls more into the morbid curiosity category. Regular readers know how much I absolutely hated The Dark Knight, so I am curious to see how much of a train wreck this one will be. And then there's John Carter. In some ways, I have been more excited about this one than The Avengers.

First things first, all you critics and naysayers and underage idiots who think it rips off Star Wars can all just go to hell. John Carter is awesome. The books, by Edgar Rice Burroughs about John Carter of Mars are now over a hundred years old. A century, idiots, so if anything, George Lucas was mining Burroughs, not the other way around. And that goes for everything else under a hundred years old the uneducated are saying John Carter rips off. This is the original, literally the great granddaddy of pulp adventure science fiction. Everything from Flash Gordon to Superman to Adam Strange to Avatar owes a huge debt to this property. 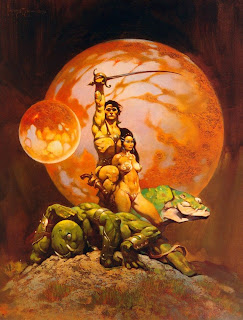 And the other thing, yeah, that thing, I don't want to hear any crap about box office. Yes, it was an expensive movie, and yes, it did not do well at the box office. The box office folks are talking about is domestic, John Carter did quite well overseas, where also apparently folks knew who the character was, despite the "of Mars" being removed from the title, but I'll get to that in a minute. The fact is not that the movie did do well financially, it just did not do the numbers it was expected to do, that's all. Let's look at the facts - John Carter has made more money than The Artist and Hugo combined. Does that sound like a bomb to you?

There were other problems. The project got orphaned at Disney/Pixar, as nearly everyone involved in marketing was no longer with the company when it came out. So Disney only gave it the minimum promotion a motion picture of its size, budget and content should have gotten. Disney had written the film off before it even came out, and in recent weeks has even admitted it. Feeling saturated by the PR blitz of The Avengers and Brave? Well, enjoy, that's John Carter's marketing money at work. 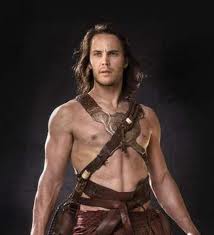 And then there's the title. Disney had a real bomb last year called Mars Needs Moms, and decided that the word "Mars" was bad publicity, and so removed it. These are also the geniuses who wouldn't call it A Princess of Mars (the book on which this movie is mostly based) because it would confuse the little girls (and probably the parents as well) in the audience. Not only is that just plain stupid reasoning, it's also ripping the heart out of the character. John Carter is John Carter of Mars, period. It's like calling a movie about Superman just "Man." And also if they had kept the "Mars" in the title, at least some of the folks who weren't aware of the character wouldn't have at least known it was scifi of some sort.

Despite all that that, despite all of this crap that has been piled on top of the movie - I loved it. I've seen it three times. John Carter is the best movie I've seen this year. Now don't get me wrong, it's not a great movie, and there's nothing original you haven't already seen somewhere else (it has had a hundred years to be ripped off, mind you), but it is a fun movie, and I really enjoyed the two hours plus I spent in the theater each time. There hasn't been an adventure like this is some time. 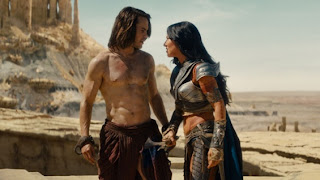 Based on the first novel A Princess of Mars, yet borrowing from later novels as well, John Carter stars newcomer Taylor Kitsch ("Friday Night Lights") in the title role, genre actress Lynn Collins as the Princess, and Willem Dafoe brilliantly voice acting Carter's Thark friend Tars Tarkas. Rounding out the cast are two veteran actors from one of my favorite HBO series "Rome," Julius Caesar and Mark Antony, as well as Dominic West and Bryan Cranston who rule the screen while they're on it. 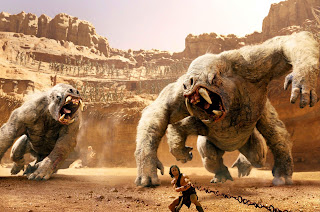 John Carter is a fun adventure flick - don't believe anything the naysayers tell you, go see it, go see it now.