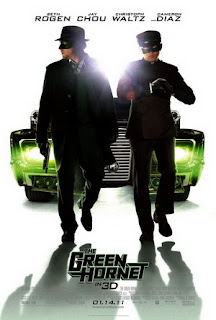 I have been waiting for this movie for a long time. And by long time, we're literally talking almost two decades, as that's how long this property has been floating around Hollywood. At different times George Clooney, Jet Li and Kevin Smith have all been involved in its production in one capacity or another. I'm just happy it finally got made. And despite my trepidation at this Seth Rogan action comedy version, I still couldn't wait to see it, and the four days I had to wait since its release until I saw it were far harder to wait than the twenty years before it. Thankfully, the wait was worth it, this was a terrific surprise and a great flick.

For those not in the know, you might want to check out my article "Re-Introducing the Green Hornet" over at the All Things Fun! Blogs. If nothing else, it should hip you to the love I have for the character and the mythology. Yeah, this flick was pretty important to me. 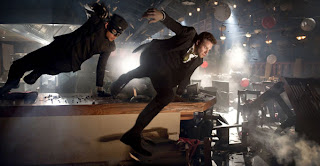 My fears about this being an action comedy were somewhat relieved when I read an interview with co-writer and title star Seth Rogan. Despite his obvious slob comedy background, the guy has a pure and hardcore love for the Hornet, and while it does descend to the usual Rogan jokey depths, the quality and integrity of the mythos is upheld in my opinion.

The plot, slightly altered from the original has Britt Reid an irresponsible rich boy partier whose father is slain for writing an anti-crime editorial. Britt is forced to straighten out as he inherits his father's multi-million dollar newspaper. Accompanied by his father's mechanic, Kato, played by Taiwan pop sensation Jay Chou, he decides that he wants to do something with his life - that being a covert superhero believed to be a villain. 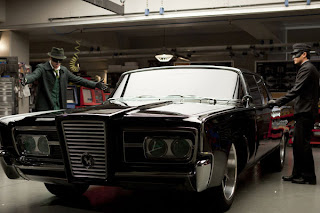 Now Rogan and director Michael Gondry are no fools, they have seen the 1960s "Green Hornet" TV series and they know that the Black Beauty, the badass car, is the real star here. There is much care put into the concept mixing contemporary and retro that make the Black Beauty just as cool now as it was in 1966. I don't know about you, but I always liked the Black Beauty better than the Batmobile, and still do.

The Green Hornet and Kato have a very unique relationship in the world of superheroes, they are partners rather than hero and sidekick, and this is explored well here, as it would be in the beginning of such a partnership dynamic. Even when it deteriorates into foolish and comedic combat, it rings true. 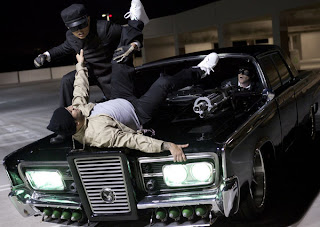 Seth Rogan toned up for the role and looks good, and when things get serious, he is right on top of it. I love the tie and the vest, both nods to the TV series. Jay Chou, much like Bruce Lee before him, steals the show. He's the reason to see this, and he'll be big after this. Christoph Waltz, Oscar winning Nazi from Quentin Tarantino's Inglourious Basterds, is an intriguing take on the super-villain. Meek, middle-aged, sand oft spoken but still a dangerous sociopath, he is subtlety incarnate here. Another prize performance. Cameron Diaz and Edward James Olmos are lost here in my opinion. Hopefully there will be a sequel to make better use of their talents. 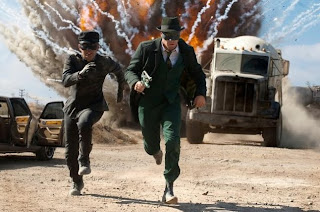 It's not a perfect movie, and I do have some fanboy nitpicks that did bother me. I wish we had seen the Hornet Sting, and I wish we had heard more of the theme song "Flight of the Bumblebee." I mean we heard more of it in Kill Bill in homage to the Green Hornet than we did in the actual Green Hornet film. And of course the whole final chase/fight at the climax of the flick could have been avoided had the Black Beauty had wireless. I mean, really, it's got rocket launchers, machine guns, even a record turntable, but no wireless?

My big problem was of course the identity of the main villain. It hurt me deep. Really, having him be the big bad is the same as having Commissioner Gordon revealed as the main villain in the Batman films. It just doesn't work. Again, I should say it does work. I don't like it but it works.

All in all, this was a great flick, and has done better than I think folks thought it would have. The Green Hornet is the best flick I've seen so far this year, and heartily recommended. See it.