How Low Can Idol Go? 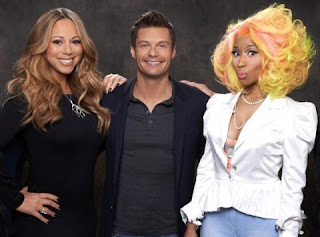 One of the big Hollywood gossip stories of the last week, and one that dominated TMZ was the Nicki Minaj - Mariah Carey blow-up on the set of the Charlotte SC auditions for "American Idol." Apparently the two new judges on the show had words, exchanged threats, and some witnesses say even got physical. To me, even when the news first broke, it all seemed very suspect.

Later Mariah appeared on "The View" and mentioned, yeah, it was that casual, that Minaj had said if she had a gun, she "would have shot the bitch," meaning Carey. Mariah's husband, Nick Cannon, host of another talent show on another network, stated this past weekend that it was "all good." I don't know, a death threat, or at the very least a gun threat doesn't sound to me to be "all good." I think I'd be pressing charges if that was me or my wife - and double that if I was a big star in the public eye. 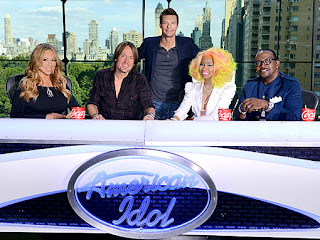 That, coupled with the fact that "Idol" remains in production, with no judges being removed, or visible disciplinary or legal action being taken - and especially considering the show's flagging ratings last season - just stinks of publicity stunt.

What do you folks think? I think the ratings will be bigger come January when "American Idol" returns to Fox, and furthermore, I think both Carey and Minaj will be in attendance. One of my favorite quotes is one from Salvatore Dali, and was appropriated by Madonna - "There is no such thing as bad publicity." I think it fits here. Time will tell.