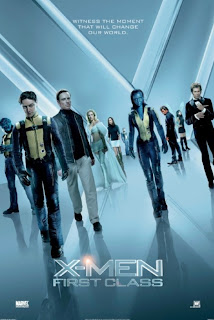 After the fiasco that was the third X-Men film, appropriately called The Last Stand, I really wanted nothing to do with seeing another X-film. Even my seeing the Wolverine movie was at great protest even though I quite enjoyed parts of it. However, the teasers and previews for X-Men First Class were just too enticing, what with the concept of a period piece matched with a reboot of the series, as well as an exploration of the relationship between the young Xavier and Magneto. I was in, for better or for worse.

The beginning is a bit disturbing, replaying the opening of the first X-Men flick with young Erik Lehnsherr being pulled from his parents at a Nazi concentration camp and his magnetic power beginning to manifest against a metal gate between them. Things become much worse after that, as Kevin Bacon playing the sinister Sebastian Shaw of the Hellfire Club, shows a bit of his background as a Nazi scientist who tortures the boy to gain his secrets. 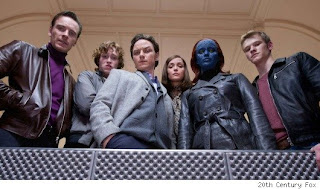 In parallel, we see the pampered young Charles Xavier gain a new sister and mutant confidant in Raven Darkholme, later to be known as Mystique. It goes on like that, with Charles finding success (except it seems picking up women in bars) and Erik hunting down Nazi war criminals, until their paths cross in the real plot of the movie.

Between the Second World War and now (now being 1962) Sebastian Shaw has changed his Nazi name and formed (or joined, it's not clear, but he is its leader) the Hellfire Club, and they plan to manipulate the US and Russia into a nuclear war that will destroy the human race and make everyone mutants - the next step in evolution. CIA agent (yeah, I know, it's a bizarre departure from her role in the comics) Moira MacTaggert suspects this and recruits Xavier to help the government. 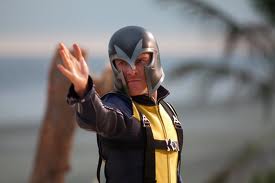 Soon, with Cerebro's help, a preliminary X-Men team is formed - including Magneto, the Beast, Banshee, Darwin, Angel Salvatore, Havok and Mystique - and they go to war with the Hellfire Club. Look for a wonderful one-line cameo from Hugh Jackman as Wolverine during the recruitment sequence. The final battle between the teams has moments like the end of The Return of the King where you think it's never going to end, but it never sinks to the lows of X-Men: The Last Stand. 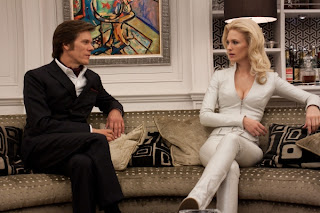 There are terrific performances here. Kevin Bacon, a name I never would have considered when thinking of Sebastian Shaw, is perfectly evil and never goes over the top as he did in other such roles like in The River Wild or The Hollow Man. January Jones is also the perfect Emma Frost, and is nowhere near as wooden as she usually is in "Mad Men." She looks the part, but frankly I was worried because I hate her work on the show so much. It is notable that she's the only thing I dislike about "Mad Men."

I liked this a lot, so much more than I ever would have suspected. If you told me I'd like an X-Men film, much less one about the X-Men vs. the Hellfire Club in the shadows of the Cuban Missile Crisis, I probably would have laughed at you. And I would have been wrong. Fans of the comics, fans of the movies, and you other folks too - you should check this out. First Class is the X-Men movie we have all been waiting for.